GREATER DUBLIN DUBLIN STREETS BELFAST CORK LIMERICK GALWAY WATERFORD KILKENNY TOP MENU
THE TENTERS PUB HAS BEEN REBUILT OR REPLACED
The tour that I went on today was lead by Pat Liddy (who I highly recommend) and sponsored by Dublin City Council (thanks). Toured part of the Liberties and despite the fact that I live not far from the area and despite that I went to Kevin Street College I saw parts of the the city that I never saw before. I will revisit most of the area when the weather is better and I will of course publish some more photographs.

Pat Liddy is a well-known Dublin historian, author and artist who has developed a unique walking tour service for Dublin. Covering the inner city and, by advance request, the coastal villages, waterways, hills and intriguing suburbs, the tours are compiled by Pat Liddy himself based on his years of experience, historical research and the collection of anecdotal and legendary stories of Ireland's Capital City


The Liberties of Dublin, Ireland were manorial jurisdictions that existed since the arrival of the Anglo-Normans in the 12th century. They were town lands united to the city, but still preserving their own jurisdiction. The most important of these liberties were the Liberty of St. Sepulchre, under the Archbishop of Dublin, and the Liberty of Thomas Court and Donore belonging to the Abbey of St. Thomas (later called the Earl of Meath's Liberty). Today's "Dublin Liberties" generally refer to the inner-city area covered by these two liberties.

Many places in The Liberties still have connections with a turbulent past in which political upheaval or dire poverty were the order of the day. In the 17th century, parts of them became wealthy districts, when the weaving crafts of the immigrant Huguenots had a ready market around the present day Meath Street Market, and a healthy export trade.

In the late 17th century development started in order to house the weavers who were moving into the area. Woolen manufacture was set up by settlers from England, while many Huguenots took up silk weaving, using skills they had acquired in their home country, France. They constructed their own traditional style of house, Dutch Billies, with gables that faced the street. Thousands of weavers became employed in the Coombe, Pimlico, Spitalfields and Weavers' Square.

However, English woolen manufacturers felt threatened by the Irish industry, and heavy duties were imposed on Irish wool exports. The Navigation Act was passed to prevent the Irish from exporting to the whole colonial market, then in 1699 the English government passed the Wool Act which prevented export to any country whatsoever, which effectively put an end to the industry in the Liberties.

A weavers' hall was built by the Weavers' Guild in the Lower Coombe in 1682. In 1745 a new hall was provided, financed by the Huguenot, David Digges La Touche. In 1750 the Guild erected a statue of George II on the front of their hall "as a mark of their sincere loyalty". The hall was demolished in 1965.

In the eighteenth century a revival took place by importing Spanish wool into Ireland, which was helped from 1775 by the Royal Dublin Society, but the events of 1798 and 1803, in which many weavers in the Liberties took part, and the economic decline that set in after the Act of Union, prevented any further growth in this industry in the Liberties.
Similarly, the successful growth of the silk and poplin industries, which was supported by the Royal Dublin Society in the second half of the 18th century, was hindered by an act passed by the Irish government in 1786, which prevented the society from supporting any house where Irish silk goods were sold. When war was declared against France under Napoleon and raw materials were difficult to obtain, the silk weavers suffered greatly.

The final blow came in the 1820s when the British government did away with the tarifs imposed upon imported silk products. From this time on fate of the Liberties was sealed and most of the once-prosperous houses became poverty-stricken tenements housing the unemployed and destitute.

The Tenter House was erected in 1815 in Cork Street, financed by Thomas Pleasants. Before this the poor weavers of the Liberties had either to suspend work in rainy weather or use the alehouse fire and thus were (as Wright expresses it) "exposed to great distress, and not unfrequently reduced either to the hospital or the gaol." The Tenter House was a brick building 275 feet long, 3 stories high, and with a central cupola. It had a form of central heating powered by four furnaces, and provided a place for weavers to stretch their material in bad weather.

Part of the area was redeveloped into affordable housing and parkland by the Iveagh Trust, the Dublin Artisans Dwellings Company and the City Council in the early to mid twentieth century. The appalling slums, dire poverty and hazardous dereliction have now been wiped away, and only a few scattered pockets remain to be demolished. 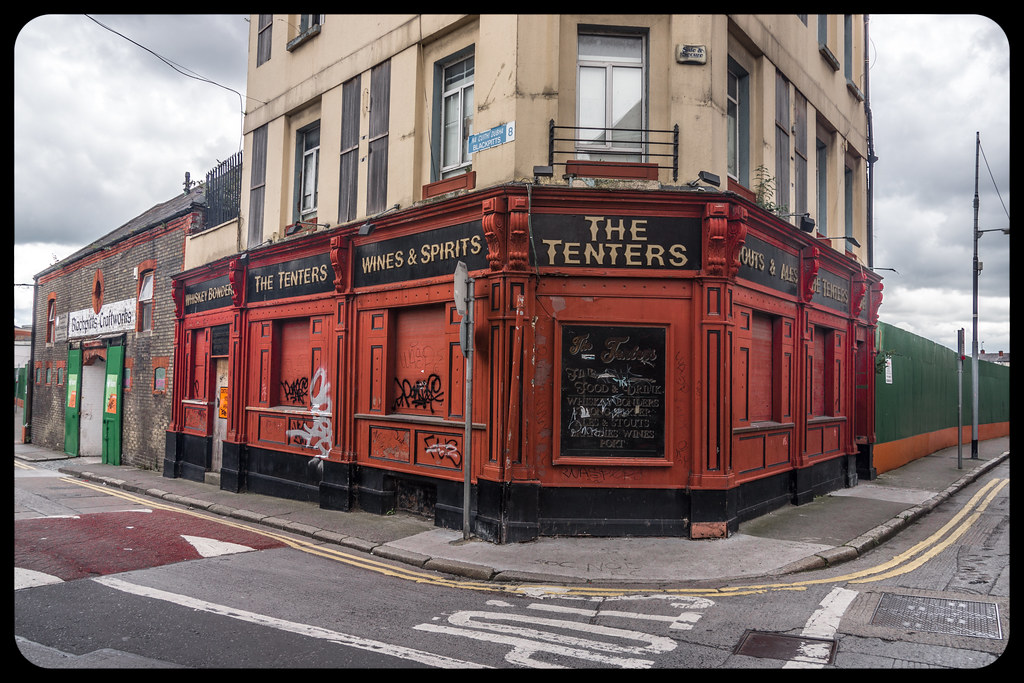